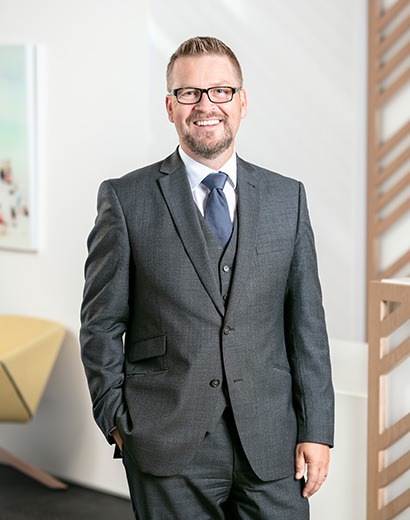 David launched the Whitelaw Twining Injury practice (WT-injury) when he joined us in 2002, building on an already successful career as a trial lawyer. Since then, David has expanded our list of bodily injury clients from less than 10 to nearly 400 – and growing. With an impressive and proven track record for results, David has achieved a remarkable total of nearly $150 million paid out to injured clients in trial awards or pre-trial settlements.

Over the last 25 years of his practice, David has handled everything from chronic myofascial / musculoskeletal injury claims and psychiatric/psychological injury claims, to catastrophic injury claims and everything between. With extensive experience in the prosecution and handling of spinal cord injuries and traumatic brain injuries, David draws on his experience in these often-complicated cases to ensure every client’s claim is thoroughly presented in order to obtain a fair and successful legal conclusion.

David frequently appears as trial and appeal counsel for injured parties in both the Supreme Court of British Columbia and the British Columbia Court of Appeal. David has also appeared as trial counsel in the Federal Court of Canada and the Federal Court of Appeal. With 25 years of trial experience and a thriving team of legal professionals behind him, David now spends a large part of his practice strategizing, mentoring and consulting with his ever growing WT-injury team.

David has considerable experience in handling motor vehicle collisions and the handling of large loss claims involving motor vehicle collisions with cyclists and pedestrians, as well as sports and recreation claims as well as commercial and social host claims.  As a former Surrey Fire Service Firefighter for many years prior to attending law school, David has many Firefighter clients and has a special interest in representing Firefighters and is well-acquainted with the unique aspects involved in advancing bodily injury claims on behalf of first responders.

David has a special interest in the effective use of medical-legal and other critical experts in the handling of our client’s bodily injury claims and at trial. David has published many articles on the subject of the effective use of expert evidence at trial and has also frequently presented as an invited guest lecturer at legal, allied health and other professional conferences in this critical area.

Called to the British Columbia Bar in 1996

Member of the Canadian Bar Association

Member of the Trial Lawyers Association of British Columbia

Member of the Law Society of British Columbia

Member of the Vancouver Bar Association